10 Reasons Why Most People Are Broke (Avoid These Mistakes)

Disclaimer: This post may contain affiliate links, meaning we will get a commission (at no cost to you) if you click through and make a purchase. Please read our affiliate disclosure for more information.
2 shares 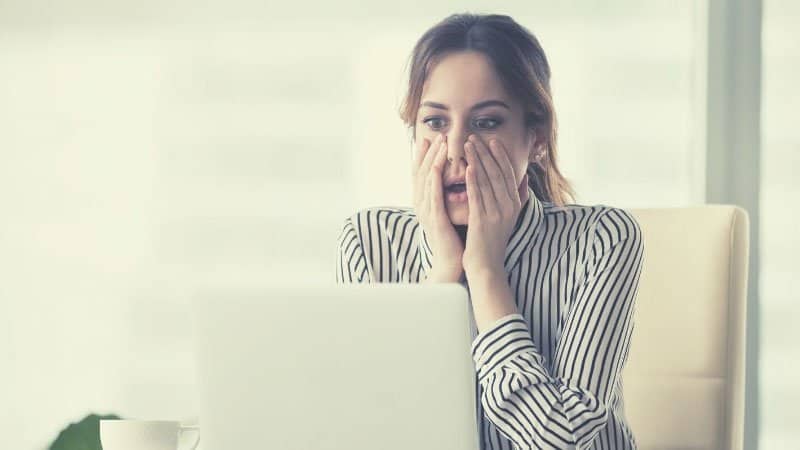 A few years ago, I was what you would consider normal. I had a decent job, a nice little one-bedroom apartment, a car payment, a couple credit cards, and some student loan debt. I had a beautiful girlfriend (that is now my wife), with whom I was dining out almost every night.

On the surface, I appeared to have it all together. But like most people, I was broke. I was living paycheck to paycheck, unprepared for any kind of financial emergency, and living beyond my means (or at least, right up to the very edge of my means).

So, if you’re wondering why most people are broke, you’ve come to the right place. I lived that life, so I know exactly what causes it. More importantly, I turned my financial life around by doing the exact opposite. And you can too.

What follows are 10 reasons why most people are broke. And if you don’t want to be like most people, all you have to do is avoid these financial mistakes. 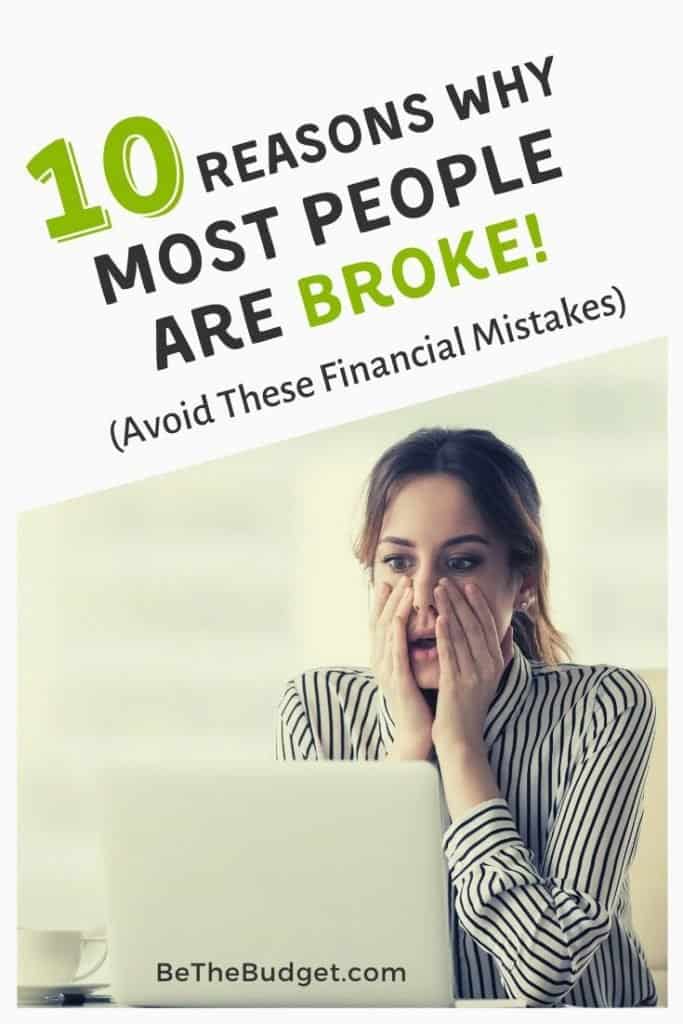 Financial goals are the starting point for every action you take make with your money. In other words, when you set financial goals, you are guiding your future financial decisions. They give you a financial direction, and a sense of purpose. Additionally, without them, your financial life will lack accountability.

For example, if you decide you want to save $10,000 this year, you have to measure every spending decision you make between now and then against the following question: will this help or hinder my efforts to save $10,000?

If you don’t want to be broke, the very first thing you should do is set financial goals. I recommend setting at least two achievement goals and two habit goals. But if you don’t know what those are, let me explain.

Achievement goals are goals that have an end point. In personal finance, they are almost always tied to a specific dollar amount. Whether you want to save $10,000 (like our earlier example), pay off all your debt, or save for a down payment on a house, these goals have a finish line; a moment when you actually achieve your goal.

Habit goals, on the other hand, do not have a finish line. They are ongoing, so the goal is consistency. A good example of a habit goal would be to invest 15% of your income every time you get paid.

They Don’t Have A Budget

One of the main reasons most people are broke, is because they don’t live on a budget. In fact, according to a recent study by U.S. Bank, only 41% of Americans stick to a budget. And without a budget, how are you supposed to know when you are getting off track in your finances?

Budgeting allows you to plan, track and analyze your spending habits. It is your well-paved path to your financial goals.

They Don’t Track Their Spending

Part of the reason most people are broke is that they don’t track their spending. But that defeats the entire purpose of a budget. If you don’t track your spending it’s easy for money to slip through your fingers. Then, before you know it, you’re broke and don’t even know why.

I like to think of tracking your spending like parenting. Little kids have a tendency to wander off, so what do you do as a parent? Keep track of them.

Well, the same goes for your money. If you don’t pay close attention to your spending habits, money has a way of wandering off. Whether it’s at the grocery store, retail stores, or restaurants, you need to keep track of your spending. Otherwise, you will find yourself wondering what happened to all that money you had.

They Use Too Many Forms Of Payment

The more complexity you add to your finances, the harder personal finance becomes.

If you’ll indulge me for a second, I’d like you to imagine a world with no credit cards, or access to borrowing money. Everybody would have to pay cash for everything they wanted to buy. Can you imagine how simple that would make your finances.

The more loans and credit cards you introduce to your finances, the more complicated everything gets. Before you know it, you’re spending money on six different credit cards with different balances.

It’s a very messy way to run your finances, and it often leads to terrible spending habits and financial mistakes.

Meanwhile, if you only use a debit card to make purchases, you can log into one account and know exactly how much money you have. This makes tracking your spending significantly easier, and budgeting as a whole, a more enjoyable process.

I don’t think it’s any secret that credit card debt is bad news. Not only does it add complexity to your spending habits (as previously mentioned), but it comes with the added gut punch of high interest rates.

In fact, the interest rates are so high, that unless you make a concerted effort to pay them off, you could remain in credit card debt forever.

Credit card debt is the worst enemy of financial success, and it’s one of the main reasons so many people are broke.

In addition to credit card debt, most people are broke because they borrow money to make large purchases they can’t afford.

Additionally, most loans are used to purchase depreciating assets like: cars, RVs, boats, and pretty much anything else with a motor. I’m not a financial genius, but I think the key to wealth is to do things that cause your money to grow; not pay somebody extra for something that loses its value.

They Base Their Financial Decisions On Cash Flow

On of the most common financial mistakes you can make is to base whether or not you can afford something on how much the monthly payment will be.

For instance, if you want to purchase a new car, “I can afford the monthly payment, therefore, I can afford it.” Meanwhile, a wealthy mindset would be, “I can’t afford this car, because I can’t pay for it outright.”

If you base your purchases on the cost of the monthly payments (whether there’s interest or not), it’s easy to end up broke. Why? Because eventually, you will max out your income with monthly payments, and the worst part is, you will be locked into those payments for months; or years.

Basing your purchases on cash flow and monthly payments is like slowly sentencing yourself to financial prison.

They Don’t Prepare For Emergencies

According to a 2018 study from the Federal Reserve Board, nearly one-third of U.S. households would need to sell something, or borrow money to cover a $400 emergency (source).

Now, I don’t know about you, but that sounds like a major problem. Especially because a $400 emergency isn’t something I would consider to be uncommon. In fact, I would consider that a pretty small emergency. Just go to the emergency room once, and you’ll know what I’m talking about.

The worst part is, the less prepared you are, the more emergencies you will run into. Don’t believe me? Ok, consider this scenario.

There are 2 people. The first person has $100 in savings, while the second person has $25,000 sitting in an emergency fund. Now, imagine both of them accidentally break their phones — which they need for work– and are forced to buy new ones. I’m willing to bet the first person would call that an emergency. Meanwhile, for the second person, it was a minor inconvenience.

Can You Use Your HSA For Dental Expenses?

First off, I think it’s important for you to understand that saving money will not make you rich. In order to become wealthy, you need to put your money to work, and that means consistent investing over a long period of time.

In fact, do you know the difference between broke people and wealthy people?

So, essentially, if you don’t want to be broke, you need to do two things: don’t go into debt, and invest. That way, you won’t be paying any interest, and you will be earning it.

They Spend Before They Save

Another reason most people are broke, is because the spend money before they save.

You see, the average person will take their income, subtract their monthly expenses, and then use whatever money is left over to save and give. The problem with this is that it places more priority on spending than saving. This inevitably leads to a lackluster savings account, and slow financial progress.

So, if you want to budget correctly, and avoid the common mistakes of broke people, reverse the financial process. Rather than prioritizing spending, make giving and saving the first thing you do with your money. To put it simply: give first, save second, then live off of whatever money is left over.

The reason most people are broke, is because they make poor decisions with their money. I know, because I used to make terrible decisions with money, and I was one of them. So, if you find yourself in that same boat, it might be time to ask yourself a few questions.

Are you living by a budget and tracking your spending?

Do you spend your time paying interest on debt, or earning it on investments?

Would a $400 medical emergency require you to borrow money?

The good news is, nobody is relegated to being broke. You get to make your own financial future. All it takes is effort and better decision-making to turn your finances around.